The Roman Empire of the Second Century: Or, The Age of the Antonines 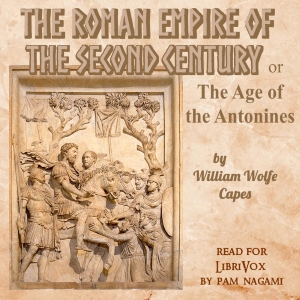 The Roman Empire of the Second Century: Or, The Age of the Antonines

LibriVox recording of The Roman Empire of the Second Century: Or, The Age of the Antonines by William Wolfe Capes.
Read in English by Pamela Nagami
This short overview of the Roman Empire from AD 96-180 opens as the murderers of Domitian raise to power the wise old senator, Nerva. Ignoring assassination rumors, his successor, the brave soldier Trajan, "went about the streets almost unguarded" and was easy of access to all classes. He was followed by the brilliant, gay emperor, Hadrian, who "revised the imperial budget with the skill of a trained accountant." We meet the immortal Marcus Aurelius, the philosopher-emperor who spent his life fighting barbarians along the Danube. The book closes with chapters on the religions of the empire, on the state's response to Christianity, and on imperial administration. (Summary by Pamela Nagami)
For further information, including links to online text, reader information, RSS feeds, CD cover or other formats (if available), please go to the LibriVox catalog page for this recording.